A relatively short 8 hour drive from Huntsville, got us onto Hilton Head Island around 6 p.m. on Saturday.  We dropped by and grabbed the keys to our penthouse condo at Shorewood.  We dropped by Publix for the weeks groceries where the kids got more treats and sugared up cereals than they knew what to do with 😉  Finally, we got everything hauled up to the room, got the kids trunks on and hit the beach just in time for the sunrise. 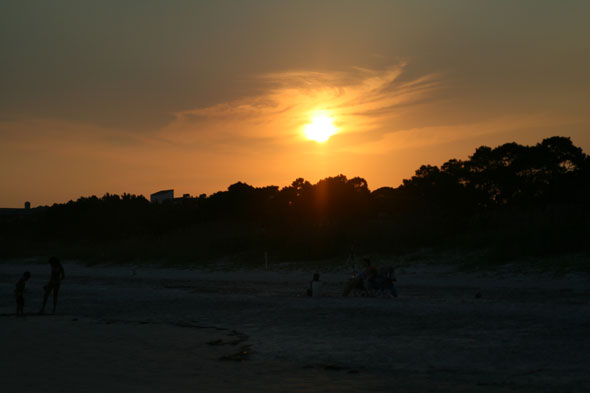 Due to Hurricane Igor a couple hundred miles due east of SC large pieces of driftwood were piling up on the beach, which made for the perfect picture of Nate and Adeline. 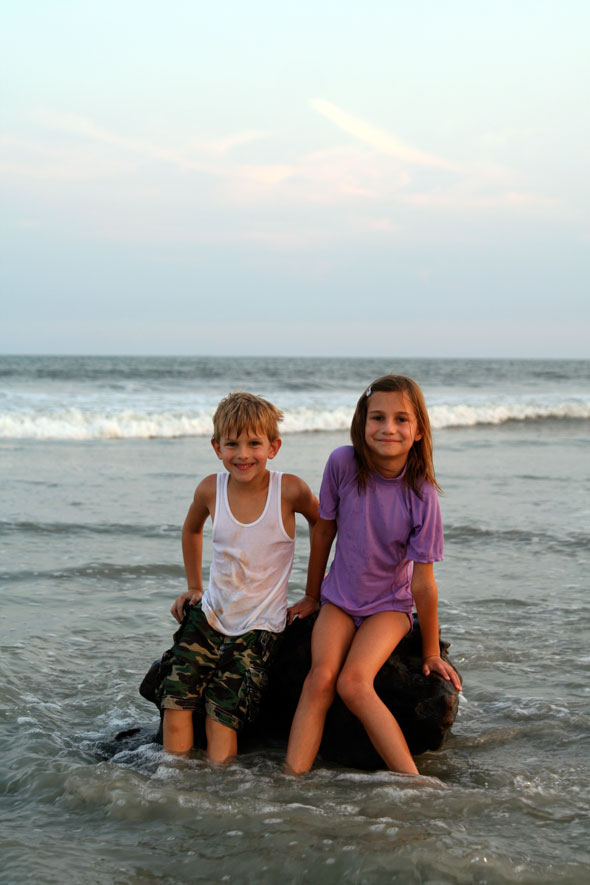 Day 2 started out with a bang.  I had the kids pumped up to join me for a sunrise, so I walked in to wake them up around 6:30.  Patting Nate I said “Nate, ready to go fishing?”.  His eyes popped open, he sat straight up in bed.  He said “Yeah!” then fell out of the bed still half asleep.  It was too funny and one I won’t forget for a long time. 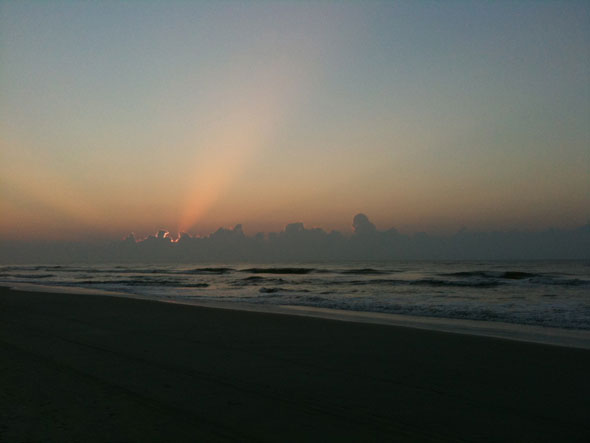 Due to the storm way off the rip currents made it tough to see bait, but I managed to snag a few to Nate’s delight. 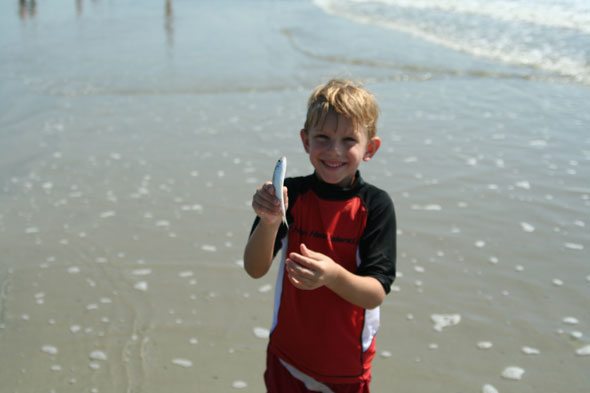 Got the poles hooked up and started waiting for the ‘big one’.  The tide was on the move out and didn’t get any action until it settled all the way out.  Then without warning, bang!  Rod #1 bends over hard.  I’m about 100 yards away, at the tackle box, and streak across the beach.  A 30 minute battle ensues. 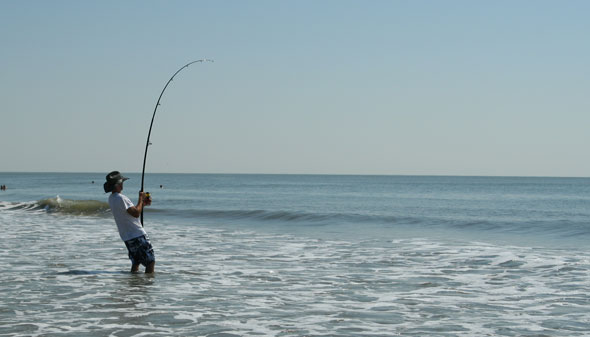 After a couple of major runs, the beast was wearing out, but so was I.  My arm was J-E-L-L-O! 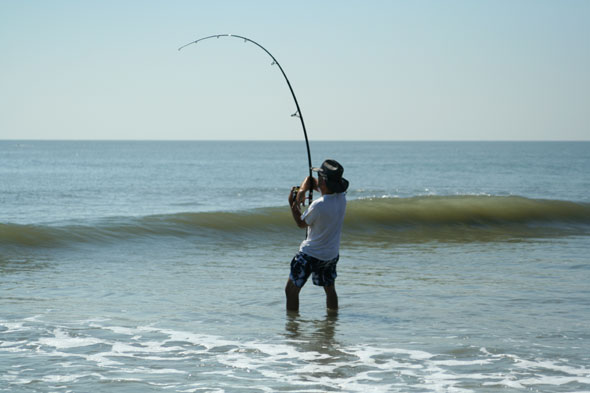 With nearly 200 people watching the battle, including the birds, the beast surfaces.  From the looks of it, its a very large stingray.  What I found out later is that it was actually a skate.  Looks just like a stingray but has no tail.  A tail makes it much easier to get these beasts on the beach, since they suck themselves to the bottom of the ocean.  I pulled on this guy so hard that the 6/0 hook actually snapped in half.  Never seen anything like it. 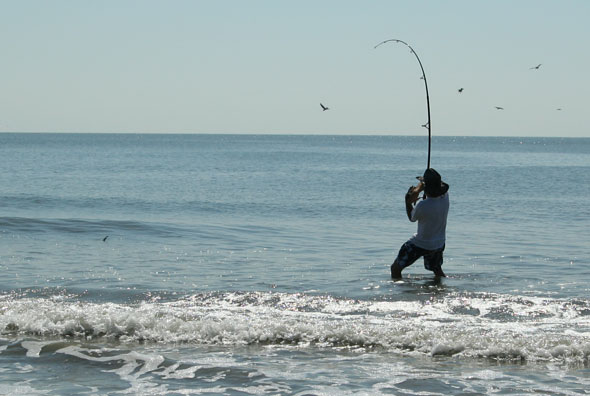 The only other catch of the day was a small bluefish.

With high surf advisories in effect I decided that a sunrise was not on the docket for the day.  We all slept in and had a peaceful morning.  We lathered up with sunscreen and hit the beach around 9.  In no time at all I netted some bait and got to fishing.

Lots of small stuff biting my mullet leaving nothing but the head.  However when these guys bite, they eat everything!  It’s a small 3′ blacktip shark, but was a blast for Nate to handle.  Nate wasn’t ready to get this guy off the hook 😛 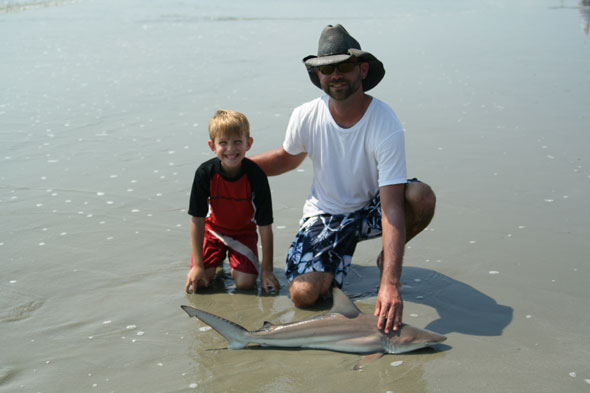 Not to much after shark #1, we got another hookup.  Adeline reeled this guy in. 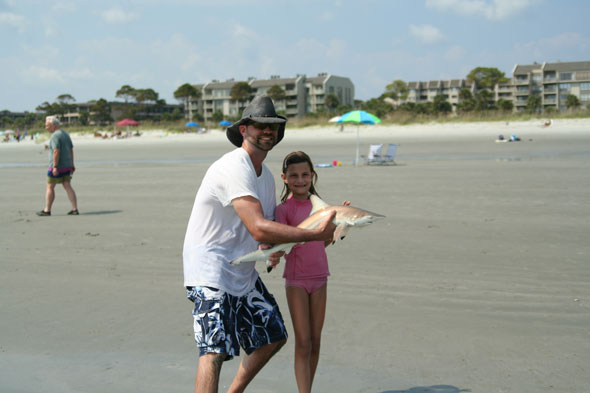 The tide starting moving back in, and the bite turned off.

Tuesday was the first day of a calm Hilton Head beach as can be expected much of the year.  The storm had moved far enough north to not effect our surf.  Tons of bait to be found and caught a 4 small sharks and a couple of bluefish.

Another beautiful day, and another load full of bait for the taking.  Had a couple of ladyfish hook-up today, but didn’t nab any pictures 🙁

Thursday is a blur.  Not sure I caught anything, although that is hard to believe 😀 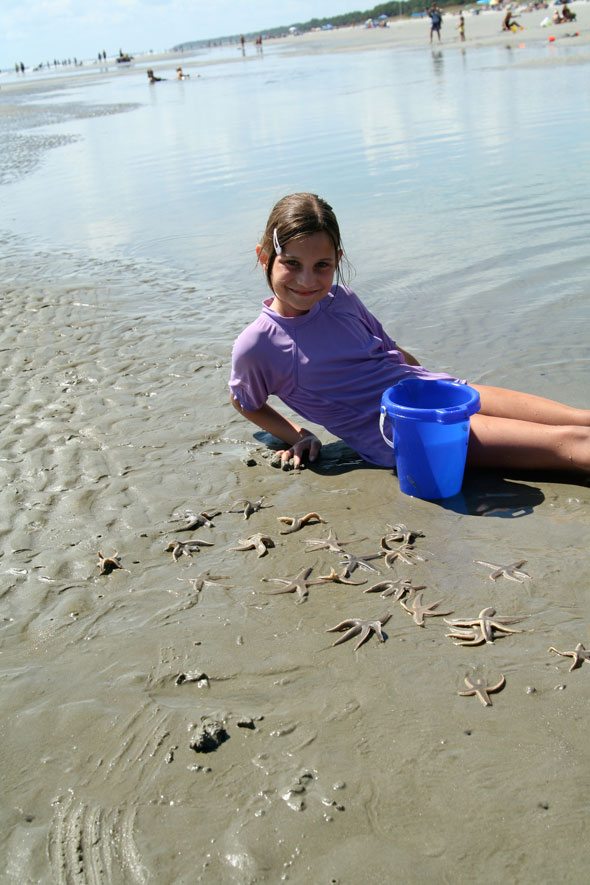 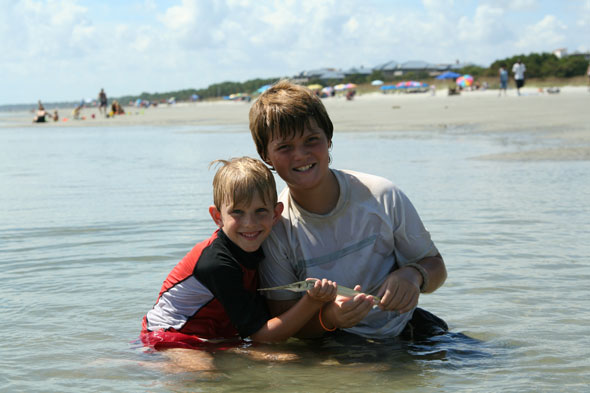 Today started out slooooooooow!  With the tide shift it took a while to get to low tide, when the bite turns on, but when it did it was amazing.  Ended up catching two back to back Jack Crevalle, then ended up battling a good sized stingray.  Another big crowd as this was about a 15 minute battle. 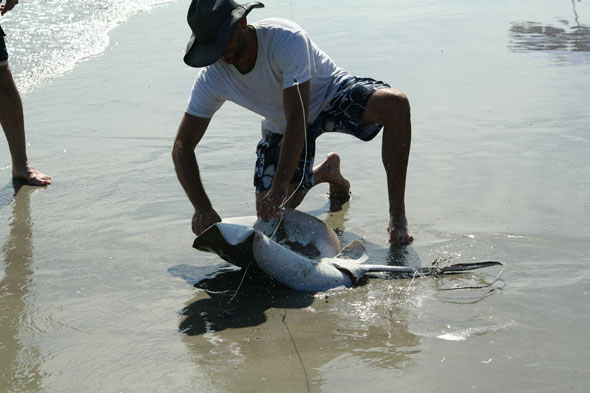 After flipping him over and removing the hook, got him back right side up for a quick release. 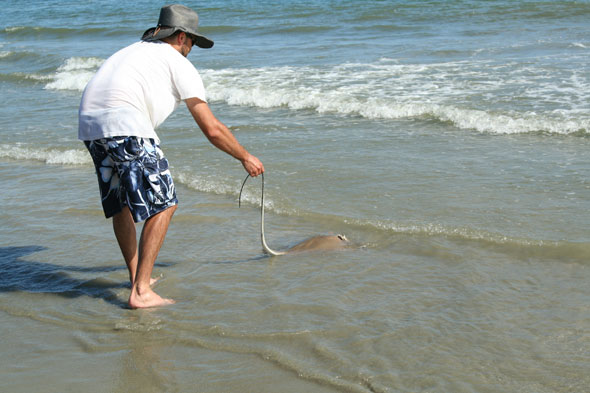 Right after this guy was released the other pole got nailed, but missed the hookup.

To finish off the week we got Nate’s kite up!  He was stoked! 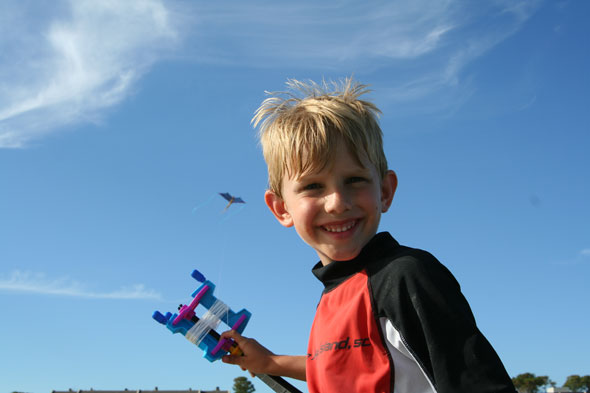 I'm an electrical / systems engineer by trade and an entrepreneur at heart. My bride, Stephanie, she's also an engineer, of the domestic variety. For 11 years we've been on an amazing journey together.